In the afternoon of Oct.10th, Francisco Suárez, the director of Valladolid Professional Media and Public Relation Company, had a meeting with Jiang Feng, Doudier.com’s representative at Spain, and appreciated 10-meter scroll of The Portrait of Li Qingzhao’s Verses created by Ge Ping. 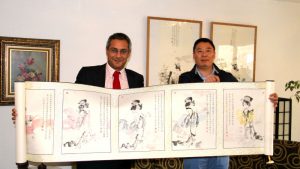 Director Suárez marveled at the scroll after observed the scroll carefully:“ It is marvelous and beautiful, and more people should be able to appreciate the real Chinese art.”

Li Qingzhao is claimed as ”the most talented female in the world”; She is good at writing poetry and verses, and the most obvious character of her verses is the exquisite depiction of emotions, so she is regarded as the representative of romantic school. He said that since Ge Ping was also an female artist with rich life experiences, she could understand and express Li Qingzhao’s verses better, especially using the technique of free hand brush work which enables the audiences to imagine the story and feeling behind the paintings.

Valladolid is the source of Spanish Renaissance. Cervantes created his representative work, Don Quixote, in Valladolid, and the Cervantes’ home there preserves the most original characteristics of the history. The discoverer of America, Columbus died in Valladolid in 1506. 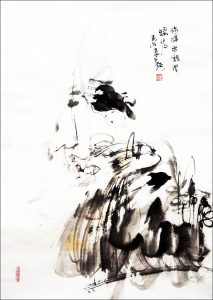 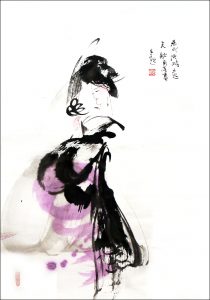